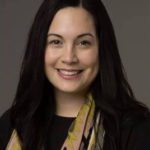 Janine Salinas was a 2016 Disney/ABC Fellow. She was a Staff Writer on the third season of American Crime, selected by Entertainment Weekly as one of the 10 best shows of 2017. As a playwright she has had works developed and/or produced at: Atwater Village Theatre, Playwrights’ Arena, Los Angeles Theatre Center, Center Theatre Group, and South Coast Repertory. She has been nominated for the Princess Grace Award, the Wendy Wasserstein Prize, and was a Quarterfinalist for the Academy Nicholl Fellowship in Screenwriting. She is the recipient of a MacDowell Fellowship, and a Project Involve Fellowship through Film Independent. Janine was a participant in the AFI Directing Workshop for Women where she was awarded the Nancy Malone Award in directing for her short film, Jenny & Lalo. She also participated in the 2014 Sundance Institute Screenwriters Intensive, and the 2015 National Hispanic Media Coalition Television Writers Program. Janine received her M.F.A. from the University of Southern California’s Dramatic Writing Program.